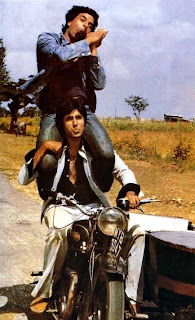 At first glance, Sholay gives the impression of cheesy trigger-happy cowboys shooting at each other in a typical Western flick. The movie opens with a train entering Chandanpur station. The camera zooms in to focus on two men roaming on their horse across the rugged landscape, as the music transports the audience to the Wild West. The men, a servant and a jailer, arrive at the house of Thakur Baldev Singh, a retired police investigator and a landlord. In his flashback, he explains to the Jailer why the two crooks, Veeru and Jai, are crucial to complete his mission. For the next ten minutes, the audience becomes spectators to violent and intense action sequence as Veeru and Jai, who were arrested by Thakur for stealing, fight alongside their captor to defeat the malevolent train robbers.

As the robbers fall behind, Veeru and Jai realize that they can escape since Thakur was injured. However, after a coin toss, they decide to save Thakur’s life by taking him to hospital. The film emerges out of this flashback as Thakur expresses, “if they had so desired, they could have left me and escaped. They are scoundrels, but brave. They are considered dangerous, but know how to fight. They are bad, but human.” The dual nature of Veeru and Jav’s characters, and later on, of other characters, shapes the complex narrative of this multi-layered film. It is rich with symbolic representations and metaphors that reflect the political sentiments of the time. Sholay, a 1975 melodrama, demonstrates how vigilante justice can serve to protect and maintain social order while reinforcing the acceptance of social norms as the key to establishing a morally sound class consciousness.

In the first half of the movie, Thakur’s motive for hiring Veeru and Jai remains unclear. He wants the two friends to go capture the evil chief of the bandits, Gabbar Singh, who, as Thakur later reveals, murdered his entire family with the exception of his daughter-in-law, Radha, and took away both of his arms. Before the arrival of our heroes Veeru and Jai, Gabbar Singh and his subordinates terrorize the villagers, disrupting their everyday lives and robbing their livelihood. After several confrontations with Gabbar Singh at the village, Veeru and Jai decide to go on the offensive, attacking Gabbar at his base. In the end, Jai died trying to save his friend Veeru and his fiancé, Basanti. Veeru, mourning the death of his partner, attains extraordinary accurate shooting power, kills the rest of the bandits and confronts Gabbar. Thakur appears and demands to be alone with Gabbar, seeking personal justice. As Gabbar lies there dying at the mercy of Thakur, the police arrive, saving Gabbar’s worthless life. This ending shocks the audience. Thakur is thus forever denied vengeance.

The massive popularity of Sholay can be understood through its de-mystification and de-classification of the hero figure (Sholay and the Discourse of Evil, 59). This is evident in the “near absence of any depiction of the protagonists in their place of work (Monteiro, 145).” The heroes lack a specific profession or class position. This notion diverts the hero’s productive role, closing in on “their uniquely human attributes of self-creation, self-realization, and freedom (Ibid, 145).

The small time crooks Veeru and Jai turn out to be unexpected heroes. Their appeal lies in their dual-natured, even contradictory, personalities. Veeru is depicted as a free spirited and easy-to-please young man whose life is defined by his thirst for action and excitement. Meanwhile, to balance out his high energy friend, Jai is a quiet, self-possessed, and confident man of few words. Despite their criminal past, they are reformable. Since they are the supposedly heroes, they can never be ‘evil’ (Zankar, 356). Both are just mischievous thieves who scammed the government for living. They did not rob nor murder people. Sholay, therefore, is a movie about how heroes are made and not born. The flawed past of Veeru and Jai just makes them more lovable and personable to the audience, yet they are still representative of absolute good. Like the character of Gulabo in Pyaasa, a prostitute with a heart of gold, Veeru and Jai are petty thieves with good hearts. The fact that they refuse to take the bounty money from Thakur illustrates this. Together, they are a force to be reckoned with, replacing Thakur’s missing arms and helping him seek personal justice.

Of course, a hero would not exist without a villain. The moral polarity of the movie is apparent when the character of Gabbar Singh is introduced. He is a modern villain. His tall and dark physique along with sadistic humor, “raised eyebrows, and other deliberate mannerism gave him a distinct identity (Zankar, 362).” His demeanor creates an air of authority, of an all-powerful dictator. His clothing consists of modern military shoes and leather belts. Gabbar embodies absolute evil, merciless in his anger. His character marks “the emergence of the seemingly omnipotent oppressor as the villain (Ibid, 365).” As the audience learns from the movie, Gabbar escapes jail and comes back to kill Thakur’s family. In that particular scene, each member of Thakur’s family was killed by a single bullet. A staccato shot rings out as bodies fall to the ground. The audience can feel a sense of pervading evil with the eerie presence of Gabbar during the massacre. Then, the camera zooms in to the little boy, focusing on the fear in his eyes. At a low-angle, the camera looks up at Gabbar Singh high up on his horse. It seems like the boy is staring at Death himself, the Grim Reaper. The ever presence of the gun on his back becomes Gabbar’s sickle. He possesses the power to take life away.

This was also illustrated in the scene where Gabbar is playing Russian roulette with his three subordinates who have failed to complete a mission. They survive the game. To Gabbar’s surprise, he falls into uncontrollable laughter as the camera pans to his other subordinates who also laugh out loud with him. The camera zooms back out again. The scale of the imagery changes from spotlighting the individual to encompassing all of them in one frame. This scene is filled with Gabbar’s godlike laughter. In an instant, he stops laughing abruptly and shots dead the survivors.

In the battle between good and evil, it is crucial for good to defeat evil in order to achieve social order. At one particular point, the movie shows how the evil presence of Gabbar is disrupting the harmony of village life. The camera carefully picks and frames the images of the men shaping copper, another man separating the cotton, and a women doing laundry. These images convey the quintessential peaceful and quiet village. Everyone seems to have his or her own function that keeps it running. They are supposed to be content with their occupations. Suddenly, ominous music plays. From a bird’s eye view, Gabbar and his men rapidly advance toward the village altering the atmosphere from calm and collective to urgent and imminent danger. This scene implies that evil is what disrupts the social order, and it needs to be purged. Veeru and Jai are heroes because they are reformed. Gabbar Singh is evil incarnate because he does not follow the rules. Like Gabbar Singh, our heroic vigilantes operate in a more flexible system than the state could. They are individuals who chose not to be bound by legal rules and regulations. The state, limited by its own nature, encourages vigilante justice to root out the out-of-the-ordinary and non-conformist individuals who wish to commit societal harms. Even though “the state and vigilantes legally and formally opposed to each other,” they complement one another in the effort to restore law and order (Kazmi, 155).” In the final struggle, Veeru brings Gabbar to his knees. As the police take Gabbar away, the village is saved from falling into evil’s hand. The villagers, then, can resume and go back to their normal everyday activities.

On the surface, Sholay uses the humble beginnings of its heroes to connect with its audience. It puts strong emphasis on the capable and exceptional nature of individuals, only and only if it serves the welfare of society and the state. Again, Veeru and Jai are former criminals. “Its vilification and criminalization of the abnormal, the deviant, and the unusual” manipulates the vigilante individual into believing that his action is morally justified; instead, the reality is that the individual is just an extension of the state in enforcing conformity (Kazmi, 151).

The movie contains other overarching themes as well. Other characters such as Basanti, Radha, and Thakur represent important social commentaries that contribute to the coherence of the movie as a whole. At first, Basanti and Radha serve as love interests for our heroes, Veeru and Jai, respectively. However, as the movie progress, they are not just supporting characters. Each of them has a complete past, present, and future, which in turn, provides the audience with a holistic picture rather than partial acknowledgement. In another one of Thakur’s flashbacks, old Radha bares a striking resemblance to modern Basanti in her personality—talkative and life-loving. After becoming a widow, she barely talks (note to parents not to ever name their daughters Radha). She becomes physically and metaphorically imprisoned by her white sari. She has to restrict herself while others enjoy the festival of Holi. Throughout the movie, Radha is constantly denied love as both of the men she fell in love with were murdered by either Gabbar or his men. This helps to reinforce Radha as a tragic figure just like the goddess who she was named after and Gabbar as the destroyer of life. As for Basanti, she gets to be her free-spirited self whose lover lives to see another day. Ironically, Basanti is the old Radha reincarnated while Radha is a potential foreshadower of Basanti if Veeru one day died. In Sholay, and Indian culture in general, a married woman can only achieve happiness once, never again.

As for Thakur, he serves as the narrator. He sets up the social situations and controls the pace of the movie. He brings Veeru and Jai to the village, linking them with other characters in the movie (i.e. Basanti, Radha, and Gabbar). His flashbacks help to create a wider understanding the other main characters while his own character remains elusive. Thakur’s persona is defined by self-blame and his goal of vengeance. His current existence is therefore idealized and never fully human (not to mention that fact that he is missing two arms).

Overall, Sholay is special. Despite its reputation of being a “spaghetti Western,” it is complex and multi-layered, full of both overt and hidden social meanings and metaphors. With well developed characters and exciting action sequences, it is a must-see (twice or more would be better).